Move to the text

The place where how is Niigata 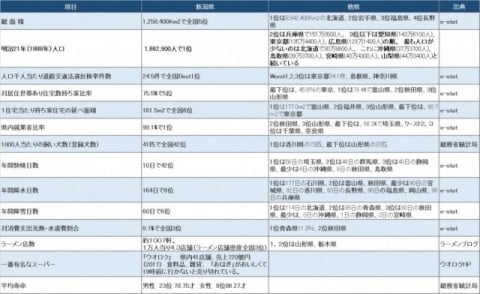 ● Niigata has the form that the head is thin along the Sea of Japan and I use the expressway and, from the boundary with Yamagata to the boundary of Toyama, take 6 hours or more by car. By the way, it can arrive at the boundary with Shizuoka within two hours except a traffic jam after crossing the Tama River in the Tomei Expressway in the case of Kanagawa.
● It seems to have possibilities to be said that the Hokuetsu district war of the late Tokugawa period was "the Japan's biggest population concentration place, a fight around Niigata that are huger than Tokyo" when I think that there is the most population of Niigata in the Meiji era.
● Rule observance is calm and, in very few prefectures of the traffic violation, shows the citizen of the prefecture characteristics who is not irritated. By the way, the NHK license fee payment rate is the national third place, too.
● The own house rate is high, and the house is large, too. It becomes the mansion if I remove and rebuild a house of average Niigata in Kanagawa. If the land is just transferred, it becomes the large mansion. Character to leave property for a descendant is had a glimpse of.
● On the clear day, it is very rare. On rain and the snowy day, it is a lot. But it is an impression that there are the most cloudy days.
● The winter heating costs increase very much. This is because it is not a high airtight house like Hokkaido, but does not have that I appear once I entered the kotatsu realized as a really cold day continues in a cold season.
● Super "uoroku" always does well. "The rice dumpling covered with bean jam" is the best.
● There are many ramen restaurants. Therefore, there is much delicious ramen. Some noodles are large noodles.
● I eat a lot of vegetables and fruit.
● A woman is a hard worker and lives long. 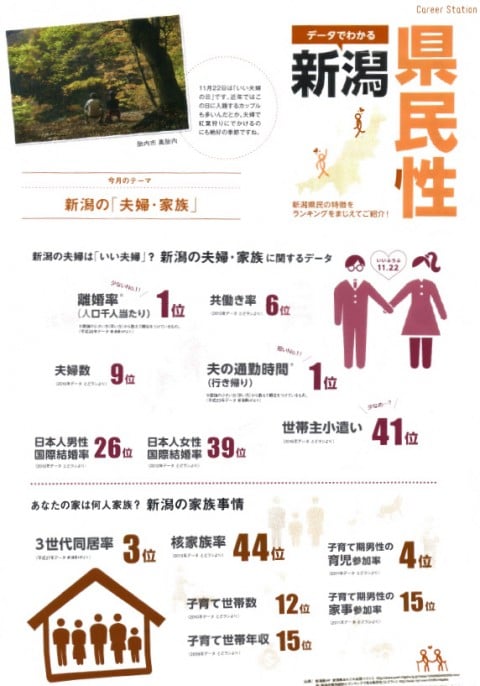 Conjugal relations are good and live in two generations, three generations, four generations. As a woman is a hard worker, I endure it even if a man has little pocket money. The parent is careful with luxury for the education of the child. 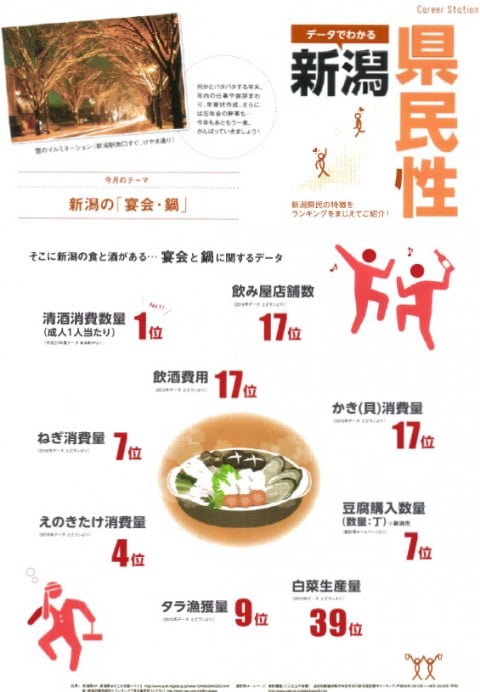 A lot of liquor drinks. However, the person helplessly drunk at downtown and a station is rarely seen. As it is luxurious entertainment to drink at a bar, there are many people having a drink with dinner in a house. 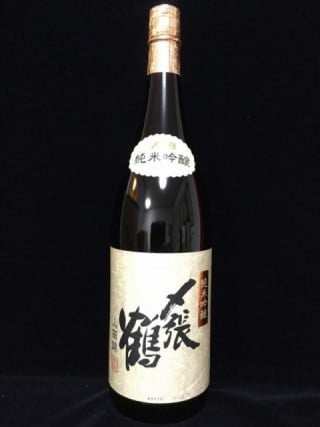 A lot of delicious sake is in Niigata.

"**shinkuchi" features the sake of Niigata generally. Because fermentation advances in water of Niigata being little super soft water for the mineral and low temperature slowly, it is sake only in Niigata of the neat taste. A lot of sake of the clear taste is made in ** using brewing suitable "500 Mangoku", U.S. It is the birthplace of the Echigo chief brewer who is the Japan's three biggest chief brewer, and it is said that Echigo chief brewer performs sake brewing in almost all warehousemans who are a number in Niigata. The number of the gold medal receiving a prize in the national young sake model review society is a great deal of sake kingdoms with the third place next to Hyogo, Kyoto with sake amount of production, too. Above all, "it closes it, and it is chotsuru" that our liquor lovers recommend all together. It is liquor refreshing manfully harking back to "Soji Okita" and "city soldier of the Imperial Guard of the wind" (main character of the novel of Kai Tsujido). 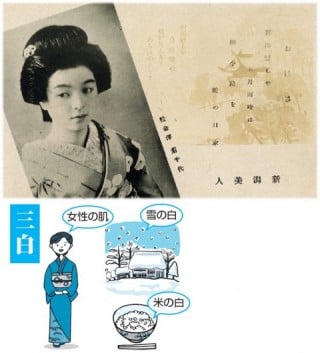 [climate] Because the daylight hours are short, and there are few ultraviolet rays, it is said that women of the pale-complexioned smooth skin increased. In addition, the quality of the water of the slush is good for skin and health and is said to be it even if it becomes factor to produce a beautiful woman.
[the history] Town - of a moat and a willow and the beautiful woman. It was taste of Niigata where many geishas came and went from the Edo era through Meiji, the Taisho era. The activeness of the geisha who arrested a traveler is written down in the book and becomes the photograph of a magazine and the picture postcard again, and it is thought that the impression called "pretty geisha girl = beautiful woman of Niigata" spread widely. (than a document of Niigata history foil military officer)
Judging from the Edo era, as for Echigo, a remote snowy country was pale-complexioned distantly, and "the woman of Echigo who seemed to be dear" that it seemed with a hard worker patiently mercifully might be one admiration with the fantastic image that the snowy district had in those days. (than local history researcher Tomoko Ota document)
[the ancient times] The legend of Princess guy Nagawa (nunakawahime) and the jade may become the hint in talking about the origin of the Niigata beautiful woman. Itoigawa of Niigata is known as a production center of the jade for a long time. It is said that the processing of the jade began for approximately 5,000 years and is proud of the world's oldest history by the processing using the jade. The ball of the jade was used for religious service and was used as a present to a man of power and was used for the trade with the countries. It shows that there was interchange flourishingly with production center Niigata of the jade that a lot of balls of this jade are found in the place of Izumo. The history of the jade processing of Itoigawa that spread out distantly from Jomon period would disappear once from a history, but the reason was mysterious and was wrapped until late years. "A ball and a sword and the mirror are symbols of the power. It is the about the end of fifth century that a country of the Yamato which took power away from Izumo in a district (a state of Takashi present Toyama, Niigata) when in trouble when I am made began a ball structure in Nara (Soga) by a ball of the jade which very high technique and training gaga are necessary for to polish up it. The history of the jade processing in Itoigawa will break off once here. From this, the reason why jade of Itoigawa disappeared from the front stage of the history until modern times can nod. (than learning through the grapevine of) studying Niigata culture story state and ancient history of our Kanda (Niigata)
I return to the story of the Niigata beautiful woman, but possibly a many (from the Eurasian Continent or India) visits person comes to the ground of Niigata where trade was prosperous as well as from the country of Izumo from the ancient times, and Jomon people and people in the Yayoi Period and mixed blood do it, and thought is famed when I might build the basis of the beautiful woman. 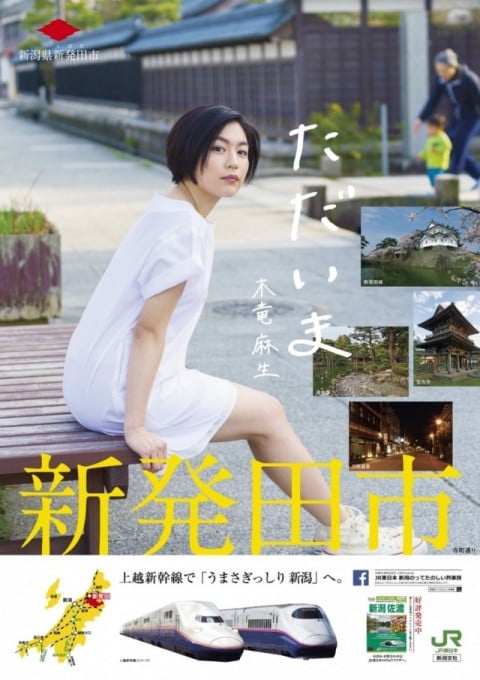 It is Shibata-shi where our headquarters factory is. It is 533.10 square kilometers in area, a population of 100,509 people (as of the end of August, 2015).
I leave cultural heritage of castle town Shibata including Shibata Castle and the common soldier tenement house becoming the important cultural property of the country in the at every turn of the town. 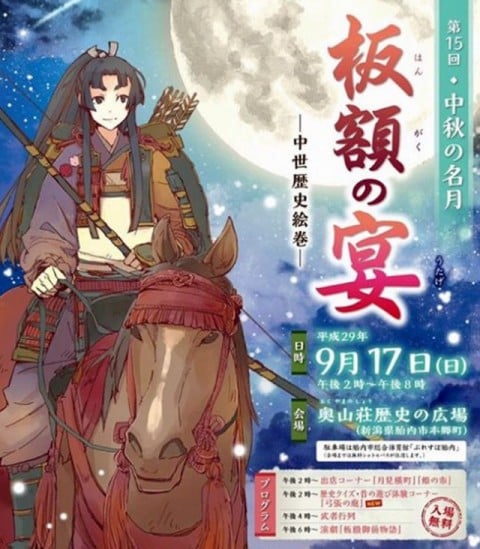 It is a city next to Shibata-shi. It is a population of 29,422 people (2018).
For a limited express stop, Nakajo of Tainai-shi becomes the neighborhood than Shibata Station. Our many employees go from this ground.
An event to remember the ugly well-built woman morning called the party of the ugly well-built woman to the harvest moon is held every year.
Because the name appears to "the Azuma mirror" in comparison with Tomoe dear to come up only in a classic in the military commanders of the woman who lived in the Kamakura era from the Heian era, it is done with the person who existed.
According to "Azuma mirror," is said to be the master of the tightly-strung bow, the hard fight swing "body tarito * of the woman is etsu yurunari for almost none of the infallible art parents, too. I say jinkyo te deserving of esteem. I particularly give a stratagem on the day of this battle. I let you make upper hair like a boy look and arrive with a bellyband and am on Yakura and I attack it and shoot the people of leading to it. un ukoto * assumes that a person of the inside dies"